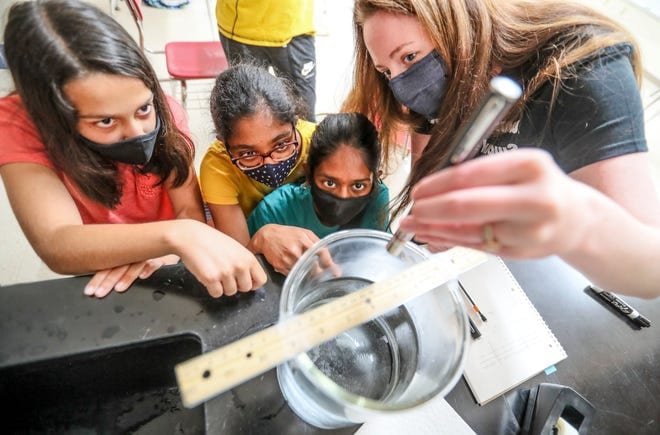 Radhika Gupta stood on her tiptoes, holding a laser pen above her head. The 12-year-old pointed the laser down through a saltine-cracker-sized, cardboard-framed glass slide that she was trying to hold steady with her other hand.

Instead of one red laser dot appearing on the linoleum classroom floor below, three evenly-spaced dots appeared a foot or two apart. Her fellow group members slid yardsticks on the ground, trying to measure the exact spacing.

The beam was split because of the glass slide, a diffraction grating with thousands of tiny slits etched into it.

That may seem like a long way from frying insects on the sidewalk in generations past. These days, children interested in science and technology increasingly have the option of attending specialized camps around the state that are stimulating and engaging.

Just in southeastern Wisconsin, at least two dozen camps focusing on STEM — science, technology, engineering, math — are scheduled for this summer. Some are affiliated with universities; some with museums. Technology companies may get involved; General Electric, for example is sponsoring a girls’ STEM camp at Milwaukee School of Engineering and other sites across the country.

Gupta was participating in Wisconsin Heights Summer Science Camp in Mazomanie. The camp, organized by the UW-Madison Biocore Outreach Ambassadors, was back after two years off, one because of COVID-19 and one because of logistical issues. The camp had several tracks; Gupta was in the camp’s brand-new quantum physics track. Organizers said this was the first quantum science outreach program in rural Wisconsin. The other tracks focused on stream ecology, human anatomy and genetics.