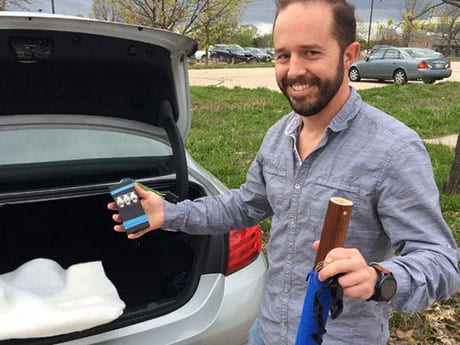 Billy Kesselring had an idea for a product he would buy if someone else had thought of it.

A hiker and a major in the Wisconsin National Guard, Kesselring wanted a walking stick that doubled as a survival tool, complete with fishing line, water filter, fire starter and snare wire hidden inside, along with a knife and 25 feet of parachute cord. So he built one and called it the Guardian Survival Staff.

His invention might have ended there, along with his designs for an inflatable pillow to ease the neck pain he suffers stemming from jumping out of a plane in the 82nd Airborne and a handheld rechargeable gizmo to test lights on trailers.

But some day soon he’d like to patent some of his designs, manufacture and sell them.

So, the veteran of multiple tours of Iraq and Afghanistan turned to Bunker Labs, a nonprofit that helps military veterans become entrepreneurs. Bunker Labs has offices in 15 cities, including Madison.

“We help military veterans start and grow businesses. We’re like venture capitalists without the money,” said Michael Ertmer, executive director of Bunker Labs in Madison, which opened in 2015. “We want to be the one source for veterans to help them get their first paying customer. Until you get a paying customer, you’re a hobby, not a business.”

Bunker Labs helps veterans vet their ideas, letting them know if their brainstorm is viable or likely destined for failure, and connects them with venture capital firms, corporate lawyers who specialize in startups, specialists in patents and others who can help start and build a business. Read more …