Dalai Lama and UW expert share message of hope, determination, and “education of the mind”

03 Jun Dalai Lama and UW expert share message of hope, determination, and “education of the mind” 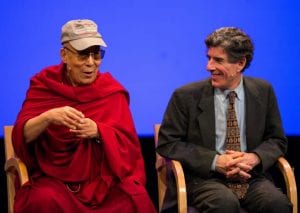 The Dalai Lama, left, appears on a panel with UW–Madison professor Richard Davidson at a 2016 event in Madison. PHOTO BY DARREN HAUCK

Humanity has an opportunity to transform negative emotions like fear and anxiety into determination and compassion for others, according to His Holiness the Dalai Lama. This message of hope is front and center in the Dalai Lama’s recent video conversation with Dan Harris, ABC News anchor and co-founder of Ten Percent Happier, and Richard Davidson, University of Wisconsin–Madison professor and founder of the Center for Healthy Minds.

The conversation comes at a time when many people around the world are experiencing unprecedented loss, hardship and isolation. Amid the recent events such as the COVID-19 pandemic, the World Health Organization has warned that a global mental health crisis is likely to follow, and many thought-leaders like the Dalai Lama, Harris and Davidson are sharing insights and tools to promote emotional well-being.

For the past 28 years, the leader of Tibetan Buddhism has partnered with scientists, including UW–Madison’s Davidson, to inspire research on how people can alter their thinking, emotions and behavior toward a kinder, wiser, more compassionate world. Davidson is well-known for his scientific work unearthing the impacts of meditation and other prosocial qualities such as compassion on the brain.

Article and links to video of conversation