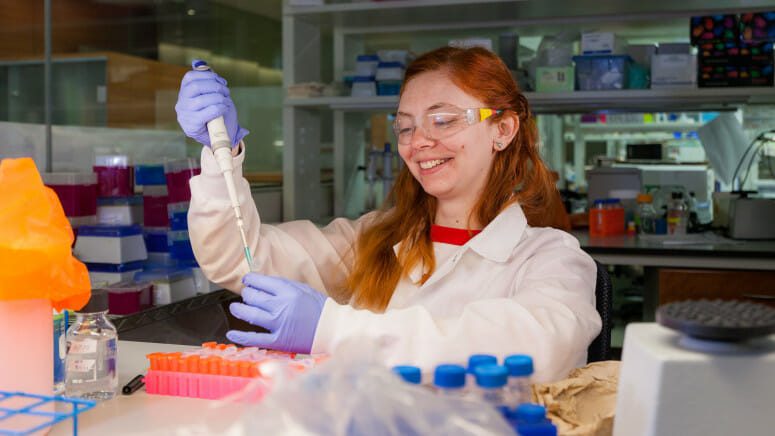 Hayley Boigenzahn is a PhD student in the UW–Madison Department of Chemical and Biological Engineering. H

One-hundred fifty years ago, Charles Darwin speculated that life likely originated in a warm little pond. There, Darwin supposed, chemical reactions and the odd lightning strike might have led to chains of amino acids that, over time, became more and more complex until the beginnings of life emerged.

Ever since, researchers have investigated this type of pre-life or “prebiotic” chemistry, trying to figure out the chemical pathways that could have led from a pool filled with simple amino acids to bacteria, redwood trees and people. After a series of experiments, University of Wisconsin–Madison chemical engineering PhD student Hayley Boigenzahn and John Yin, a professor of chemical and biological engineering and a founding faculty member of the Wisconsin Institute for Discovery, can explain how one of the potentially crucial early steps on the path of life could have happened. They published their findings in the December 2022 issue of the journal Origins of Life and Evolution of Biospheres.

John Yin, professor of chemical and biological engineering at the UW-Madison

In a famous 1952 study called the Miller-Urey experiment, researchers simulated the conditions thought to be present on the prebiotic Earth, including certain ratios of water, methane, hydrogen and other elements. When zapped with electricity to simulate lightning, the researchers found that the reaction produced amino acids, suggesting that these molecules were widely present on the prebiotic Earth.

“We know amino acids are the building blocks of proteins and proteins are essential for life,” says Yin. “In prebiotic chemistry, it’s long been a question of how we could we get these things to form bonds and strings in a manner that might eventually lead to a living cell. The question is hard because the particular chemistry involved is one that tends to fail in the presence of water.”