Irving Shain, a chemistry professor and UW–Madison chancellor emeritus who advanced the university’s interests in China and established University Research Park, died peacefully Tuesday, March 6, in Madison after a brief illness. He was 92.

Shain joined the UW–Madison faculty in 1952, later chairing the Department of Chemistry from 1967 until his appointment as vice chancellor for academic affairs in 1970, serving until 1975. He was chancellor for almost a decade, from 1977 to 1986. After stepping down as chancellor, he joined the Olin Corporation as vice president and chief scientist, a post he held until 1992. 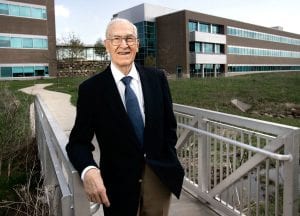