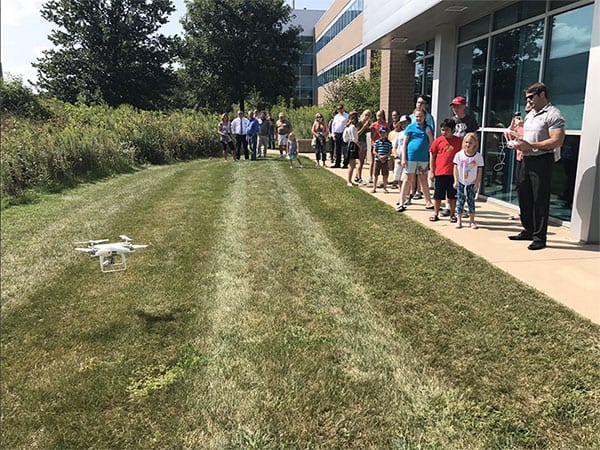 A group of enthusiastic kids got the chance try out industry-level drones as part of Madison’s Forward Fest.

They also heard about new and interesting ways drones are being used in a variety of commercial applications, as well as by the U.S. Army and casual hobbyists.

The event was held yesterday at University Research Park by the Wisconsin chapter of Bunker Labs, a national nonprofit which supports veteran-owned and operated businesses. A few drone-centric startups were there to show off their tech and give short presentations on how they and others are leveraging drone capabilities to bring value to diverse industries.

Chris Johnson, founder of Pilot Training System and instructor for a drone-flying course offered by UW-Madison, says the idea of aerial vehicles collecting useful data is nothing new. It’s been done by U.S. military planes in every conflict since WWI.

“Over time, the aircraft have become more and more capable and more and more autonomous, to the point where we’ve got these military-grade drones that still conduct surveillance and data collection missions,” he said. “But just recently, drones have made it from a military context to a civilian context.”

And that recent transition into the hands of everyday civilians has been accompanied by greater interest in drones’ use in the business world. Read more …