Posted at 14:49h in Featured, URP News by Diana Starr 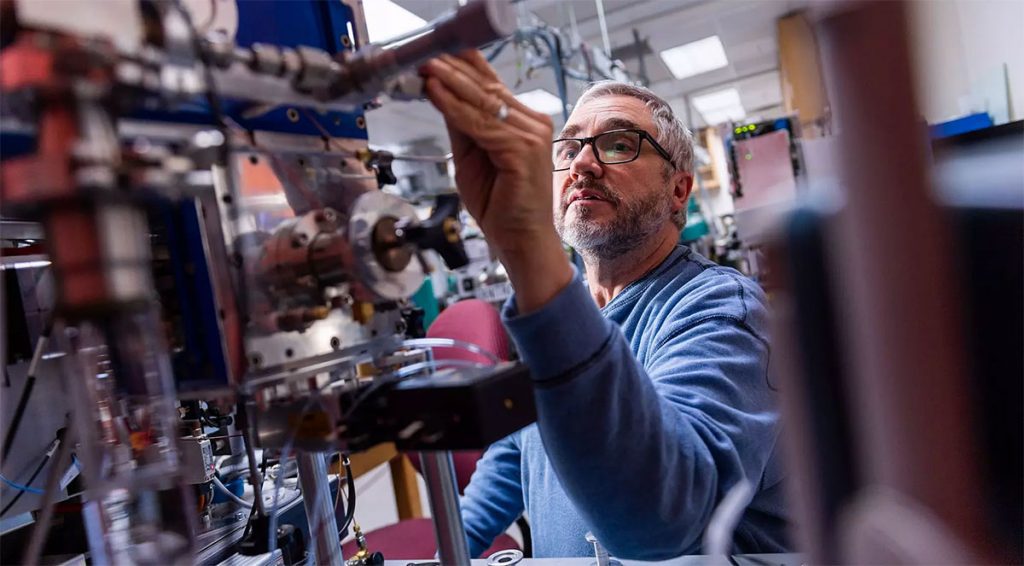 The Joshua Coon Lab has united the power of two major tools in biotechnology.

“This work is the culmination of a nearly five-year effort to couple mass spec technology to EM,” says Coon, the Thomas & Margaret Pyle Chair at the Morgridge Institute and a UW-Madison professor of biomolecular chemistry.

In the paper, the team describes modifying an Orbitrap mass spec instrument to ‘aim’ single-particle protein complexes onto a chemical matrix directly from the ion beam of the mass spec.

Importantly, the novel technology provides the first evidence that the 3D structure of proteins is retained while undergoing mass spec analysis and that atomic structures maintain their original shapes outside of the natural environment. This finding provides a huge step in confidence that researchers across all fields of biology can have in their experimental findings.

“Josh’s lab is doing things no one thought could be done,” says Brad Schwartz, Morgridge CEO. “They love making better technology and it’s all aimed at helping other scientists do their job better. The Morgridge Institute invests in scientists like Josh and his team because he’s doing what no one else has done before.”

Mass spec has become one of the must-have tools of modern biology — the technology can determine the precise chemical identity of a substance, measure the molecular mass of compounds in a sample, and quantify their abundance.

The Coon Lab specializes in mass spec, and specifically in developing instruments and technologies to help scientists address fundamental questions in biology. That led the team, spearheaded by Mike Westphall, a distinguished instrument innovator, on a path to unite the potential of mass spec, with the power of electron microscopy.