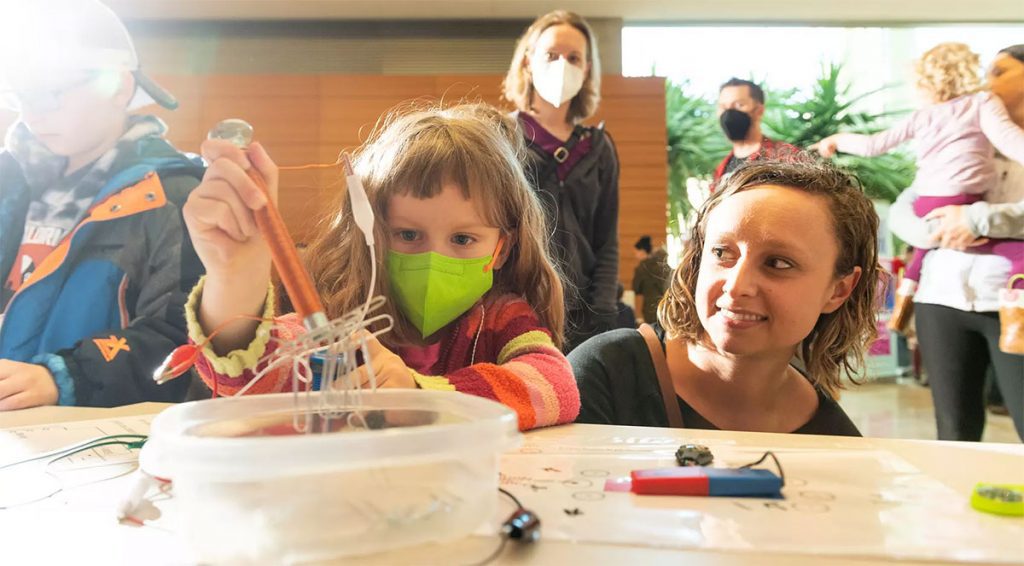 In-person science engagement is back!

April’s Saturday Science was part of the 20th annual Science Expeditions, a four-day science open house for the UW-Madison campus. Twenty-one campus units and dozens of volunteers partnered to present the program, including the Morgridge Institute.

“I was beyond delighted to see kids and their families talking face-to-face with scientists and exploring phenomena hands-on,” says Val Blair, senior lab and outreach coordinator at the Morgridge Institute. “My own family visited this morning, and they are so excited to be here, too!”

One of the most popular stations included two calves from UW-Madison’s dairy cattle herd. The pair were brought by Joao Dorea, assistant professor of animal and dairy sciences at UW-Madison, who collaborates with Morgridge Investigators Miron Livny and Brian Bockelman to demonstrate the use of artificial intelligence in livestock systems.

As the cows move, stand, or lay down in their enclosure, a camera system feeds images of the animals into a computer algorithm to track the animals’ behavior. Using artificial intelligence, it’s possible to identify individuals in a herd and note minor changes in their behavior or appearance that could indicate a change in the animal’s health.

“People, especially kids, are familiar with tech that can be used to track health data and movement [like smartwatches or video game systems], but they don’t expect to use that tech in agriculture,” says Dorea. “Events like this let us connect with youth about agricultural science by using tools and technologies that they are very familiar with.”