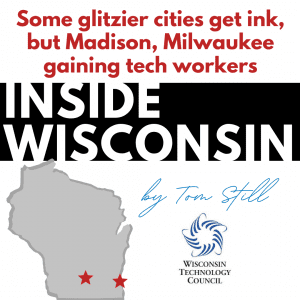 “Go Toward the Heat” trumpeted the Feb. 2 headline in the New York Times business section, which led into a story about Miami, Fla.’s, success in luring tech companies and investment firms migrating from New York’s Wall Street and California’s Silicon Valley.

It described Miami’s assets, its open-door culture and high-touch recruiting by Mayor Francis X. Suarez, who has made business recruitment a priority for his sunny and diverse city.

All accurate. Meanwhile, it’s just as true that two Wisconsin cities, Milwaukee and Madison, are performing well in the race for tech talent in the nation’s COVID-19 era.

In a recent column about the Silicon Valley exodus, I noted reasons companies, people and money should put Wisconsin on the short list for relocation.

They included quality of life, available talent trained by good schools, competitive business costs, a strong research and development tradition, ample water supplies and location in what I call the “I-Q Corridor,” the interstate band that connects Wisconsin with two regional powerhouses, Chicago and the Twin Cities of Minnesota. My “move to Wisconsin” list doesn’t include palm trees and Miami’s South Beach, but it does include a year-round attractiveness that can offer the right mix for many people.

The numbers are beginning to bear that out.