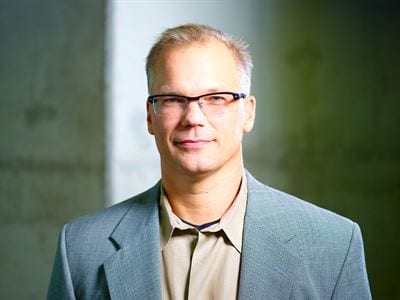 And the new WARF managing director, who took over July 1, says he’s spending the coming months getting a “solid handle” on all operations to see what changes he’d like to make.

“I don’t want to slow things down, and I’m not going to push the pause button,” Iverson said. “But I do want to bring some strategic prioritization to the organization in a very transparent way.”

Iverson, a Minnesota native who most recently was president of business and operations at the Seattle-based Infectious Disease Research Institute, replaces Carl Gulbrandsen, who retired after being WARF’s managing director since 2000.

Iverson, a former Bill & Melinda Gates Foundation lawyer, said he’s asked his staff to “reflect on what our litigation philosophy is” and present that vision to the public. WARF got major headlines last year when a Madison jury concluded in federal court Apple owed WARF $234 million in damages for infringing upon a patent from a UW-Madison computer scientist. Apple has said it’s appealing the case.

The victory, though, came with its share of negative stories, including a New York Times column that asked whether WARF is a “patent troll.” Brookings Institute fellow Walter Valdivia wrote WARF’s victory “hardly meant any gain for the good name of the university.”

Iverson refuted any suggestions that WARF is a patent troll — those who acquire a wide range of patents with the goal of getting companies to pay them for inventions they didn’t come up with.

“A troll has a common business practice of bringing the lawsuits in order to settle and to get money in the door,” Iverson said. “That’s not our practice. That’s not our business model. So I feel very comfortable that we’re not a troll, but we need to communicate to the public as to why we believe that’s the case.”

WARF’s responsibility, he added, is to “vigorously defend the intellectual output” of UW-Madison researchers and ensure their inventions are respected. But that doesn’t mean it has to “go in with a battle axe” in every case, he said, noting building relationships is often more effective. Read more …