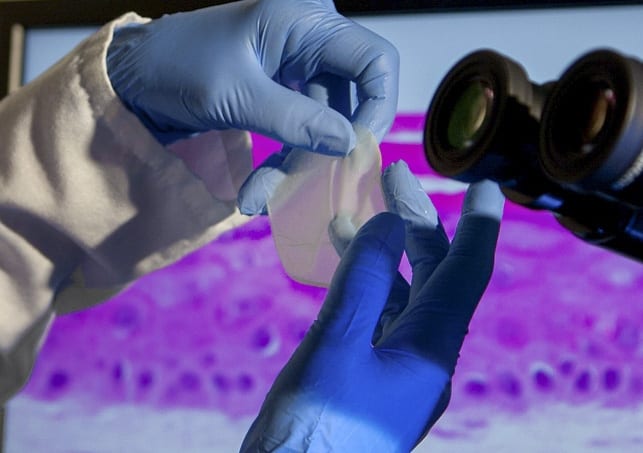 Posted at 10:33h in Resident Company News by aveak

A University of Wisconsin–Madison spinoff that makes an innovative material designed to speed healing of serious burns has begun a large clinical trial for the “regenerative skin tissue” it has been developing since 2000.

Stratatech, now a Mallinckrodt Pharmaceuticals company, aims to prove to the Food and Drug Administration that the material, called StrataGraft, is safe and effective for treating severe burns. Intense burns can be painful, even deadly, because they destroy key protections against infection and dehydration.

Today, treatment involves removing a portion of the patient’s intact skin and grafting it to the burned site. In contrast, StrataGraft is designed to cover deep burns with a matrix containing human skin cells.

These cells, called keratinocyte progenitors, are able to form the epidermis, or top layers of skin. It is possible that the progenitor cells also produce and release growth factors that stimulate regeneration of the patient’s own skin cells, yet evoke a very limited immune response.

In 2015, after its second clinical trial, Stratatech announced that StrataGraft had fully closed deep, partial-thickness burns on 27 of 28 patients in three months. “Patient outcomes in this study far exceeded our expectations, and are unprecedented in this patient population,” Stratatech founder Lynn Allen-Hoffmann said in a 2015 press release. “This is the first severe burn therapy that has shown the potential to avoid painful skin transplants and regenerate the patient’s own skin.”

In August 2016, Stratatech was purchased by Mallinckrodt Pharmaceuticals of the United Kingdom. Its offices, and about 60 employees, remain in University Research Park in Madison.

Allen-Hoffmann is on leave from her position as professor of pathology and surgery at UW–Madison’s School of Medicine and Public Health.

StrataGraft has completed two rounds of clinical trials. The make-or-break phase three trial that has now started will be performed over several years at multiple sites nationally. Read more …