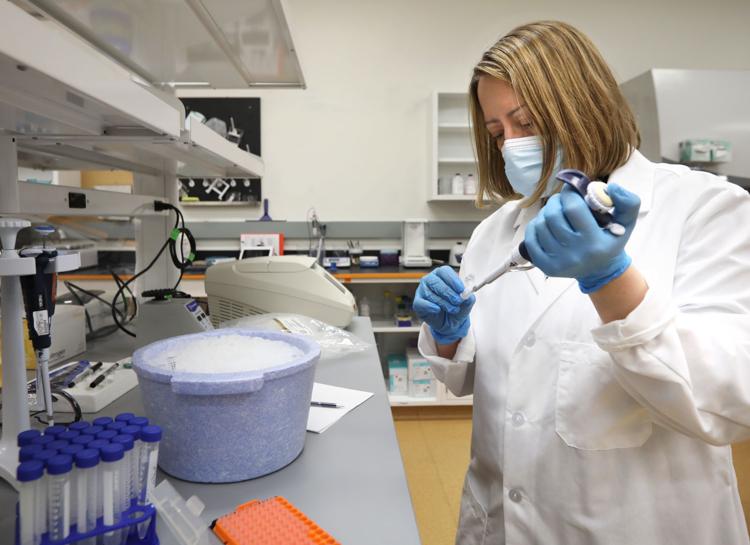 Jennifer Gagne, a scientist with Endsulin, works on developing specialized DNA for use in a gene therapy for type 1 diabetes at Forward Biolabs in Madison. The experimental therapy aims to prevent people with type 1 diabetes from having to take daily insulin shots. AMBER ARNOLD, STATE JOURNAL

Madison company started by a UW Health transplant surgeon aims to develop a gene therapy for type 1 diabetes, with the goal of regulating glucose metabolism without the need for daily insulin shots.

Endsulin’s experimental DNA injection is being tested in naturally diabetic dogs after showing promise in tests in rats and mice, but the road to studies in people, let alone approval, could be long. The Food and Drug Administration has approved only a few gene therapy treatments and last year rejected one for hemophilia that uses technology similar to Endsulin’s.

But Dr. Hans Sollinger sees hope for a treatment that could provide long-lasting help to the more than 1 million Americans with type 1 diabetes. The former chairman of transplantation at UW-Madison founded Endsulin in 2016 and retired as a transplant surgeon last year.

Endsulin’s experimental gene therapy involves a string of DNA that includes insulin and a “glucose inducible response element,” or GIRE, patented by the Wisconsin Alumni Research Foundation. The DNA is packaged in and delivered by the adeno-associated virus AAV8, which is not known to cause disease, to the liver where it is designed to trigger cells to produce insulin.

The liver typically doesn’t produce insulin but can do so if prompted and is able to regenerate, Sollinger said. In people with type 1 diabetes, the islet cells in the pancreas that produce insulin are destroyed, presumably by an autoimmune reaction. The idea of the gene therapy is to get the liver to take over insulin production. “We’re putting the genetic information into the liver cells that tells the cells, ‘Now you have to make insulin,’” Sollinger said.

Sollinger and Alam formed the company Insulete in 2004 to pursue their work. That company has been dissolved, with Sollinger founding Endsulin in 2016 and its president and interim CEO, Eric Spyra, coming on board early last year. The company is based at Forward Biolabs, a biotech business incubator at University Research Park on Madison’s West Side.