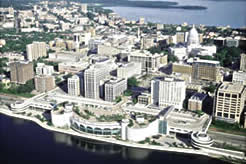 Posted at 14:34h in Featured, URP News by aveak

Livability‘s annual list confirmed what we already knew … Madison is the best place to live in the United States.

Livability evaluates each city based on the overall quality of a number of criteria, including amenities, demographics, economy, education, housing, social and civic capital, and transportation.

Most cities would be ecstatic to be listed amongst our Top 100 Best Places to Live. Last year, when we named Madison, Wis. number five, Mayor Paul Soglin wasn’t satisfied. He convened a task force and asked each department head to come up with specific recommendations for how to do better, not just for the sake of the ranking but to continue his quest to build Madison into a more livable place. In an interview last year, he told Livability that he wouldn’t rest until Madison was number one.

This year, he can rest easy. Madison sits atop our 2015 ranking of the Top 100 Best Places to Live.

The city is home to the University of Wisconsin and is also the state capital. Those facts alone help it immensely. Major institutions like that can lead to greater stability for its population and economy, and often help a small to mid-sized city outperform some of its larger counterparts. They bring in talent, research investment, jobs and a fresh influx of new residents. That helps technology incubators like Madison’s Sector 67 to flourish and adds a dash of culture like you find at the annual Art Fair on the Square. Read more …