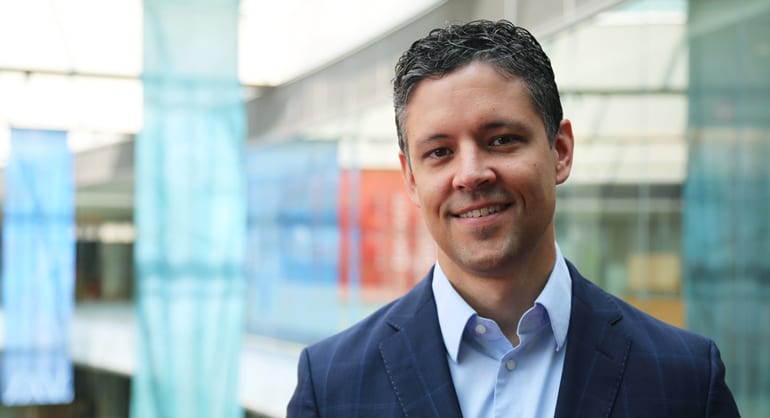 Dave Pagliarini, Director of Metabolism at the Morgridge Institute for Research and Associate Professor of Biochemistry at the University of Wisconsin-Madison, has received the U.S. government’s highest honor for scientists in the early stages of their careers.

President Barack Obama announced this month that Pagliarini is among 105 recipients nationally of the Presidential Early Career Award for Scientists and Engineers (PECASE). The awards recognize scientists “who show exceptional potential for leadership at the frontiers of scientific knowledge in the 21st century.” PECASE was created in 1996 with the goal of maintaining U.S. global leadership in science.

The Pagliarini lab focuses on the composition and function of mitochondria, tiny cellular structures at the heart of metabolism and energy production. Mitochondria still hold many secrets, and their dysfunction is associated with as many as 150 human diseases, including cancer, diabetes and Parkinson’s.

Pagliarini’s team is focused on hundreds of “orphan” proteins used by the mitochondria — proteins that currently have no clear, defined function. Defining these proteins and understanding how they work together as a system will be a major step toward finding their link to disease and developing targeted therapies.

“An award like this, to me, is much more of a call to action than it is an affirmation of what we have already done,” says Pagliarini. “It’s reflective of the hard work of my entire team and of the collaborative environment we enjoy at UW-Madison. It really motivates us to be aggressive with our science and to take on the most important problems in our field.”

“We are very proud of Dave’s accomplishment,” adds Kathryn VandenBosch, dean of the College of Agricultural and Life Sciences. “The significant potential of his work on the fundamental cell machinery of mitochondria has always been evident to those of us at UW-Madison. This acknowledgement demonstrates that others also appreciate his creativity and innovation.”

Pagliarini’s nomination came from the National Institute of Diabetes and Digestive and Kidney Disorders (NIDDK), which funds part of his program aimed at understanding how cells turn mitochondrial functions on or off —research that could prove very important for treating mitochondrial dysfunction. Because mitochondria are independent, double-membraned structures within a cell, they are very difficult to infiltrate for potential treatment. Pagliarini’s NIDDK funding is enabling his lab to explore an alternative therapeutic approach . Read more …