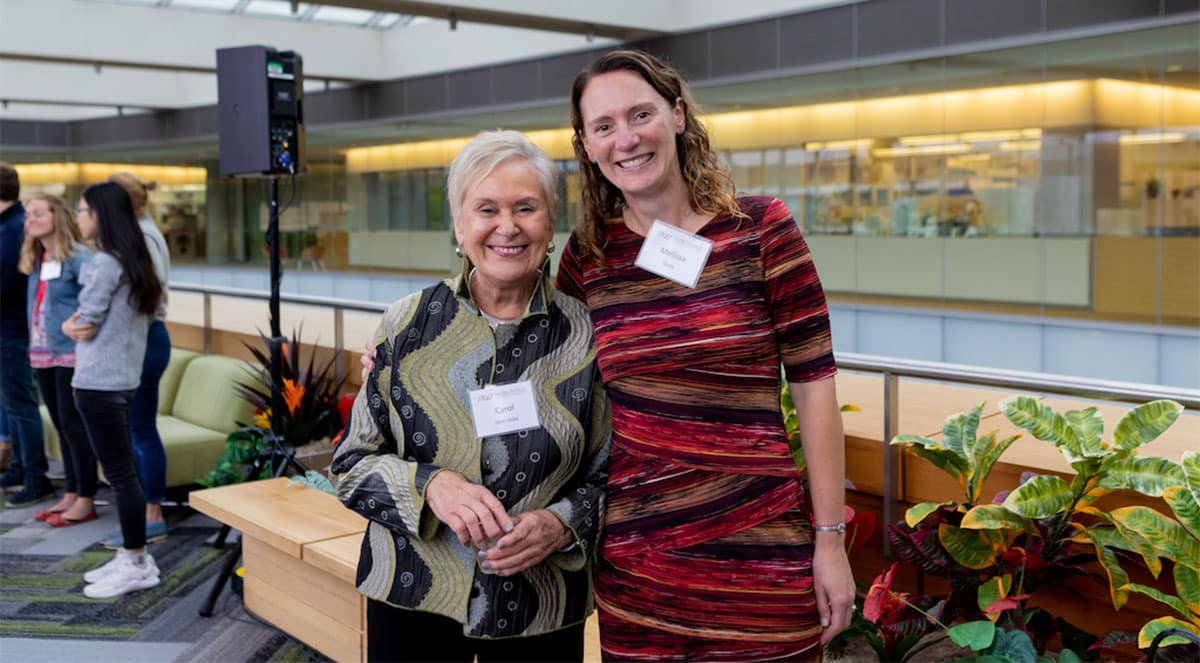 Carol Skornicka (left) and Melissa Skala (right) celebrate together during an event honoring the new Carol Skornicka Chairship bestowed to Skala in October 2022 in the Discovery Building.

Melissa Skala, an investigator in biomedical imaging and professor of biomedical engineering, has been named the Carol Skornicka Chair at the Morgridge Institute for Research.

The chairship honors Carol Skornicka (BS’62, English; MA’64, Education; JD’77), a trustee who served on both the Morgridge and Wisconsin Alumni Research Foundation Boards of Trustees in the 2000s.

Skornicka was a key player in guiding the Morgridge Institute’s early years. As a trustee, she brought her background in law, governance, and operations to shape the board’s structure, function, and leadership. She held a long career at Midwest Airlines where she was senior vice president, secretary, and general counsel and her expertise played a key role in recruiting and hiring Brad Schwartz, the Carl E. Gulbrandsen Chair, who was named Morgridge CEO in 2013.

Skornicka, who is humbled by the honorary chair, is quick to point out that as a trustee her role was to support the institute’s mission: improve human health through science and research.

But her fellow trustees are quick to say she did much more.

For her part, Skornicka says the story isn’t about her at all — it’s always been about Skala — and the chair is an important way to elevate and recognize a woman scientist.

“She’s an inspiration for all of the people in her lab and for women who are thinking about going into science. They can see that a woman can be enormously successful in science and research,” adds Skornicka.