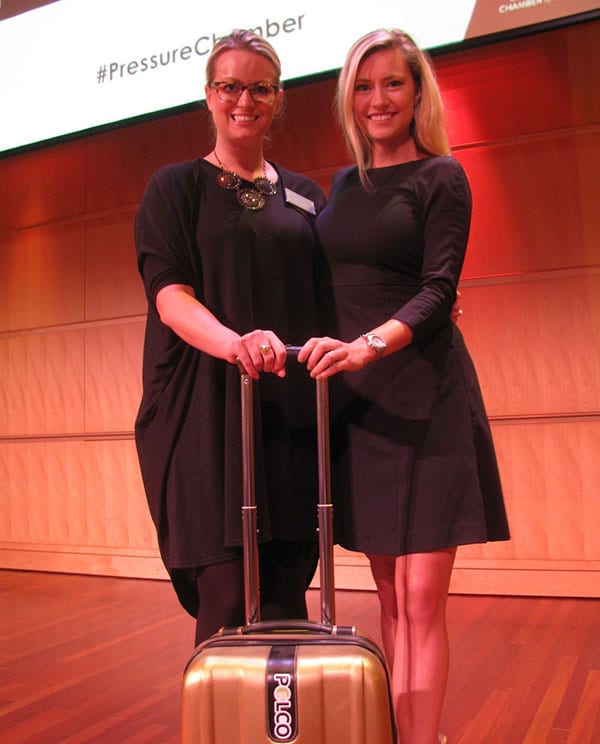 Posted at 12:06h in Featured, Resident Company News by aveak

DotCom Therapy — a company that provides speech and language therapy to patients via live videoconferencing, and that just moved to Madison this spring — won the Pressure Chamber pitch competition Monday at the Overture Center.

It was the second victory in Forward Fest startup contests for DotCom Therapy’s Emily Purdom and Rachel Robinson.

“Pretty incredible,” added Purdom. “We’re just honored to be part of such a wonderful crew of entrepreneurs.”

Purdom and Robinson were school-based speech therapists in Springfield, Missouri, who, because of a shortage of such specialists, eventually took on regular clients elsewhere, some as far as native Yupik villages in Alaska, accessible only on bush planes or snowmobiles.

“They require and deserve more than five visits a year,” Purdom said. So the women tried tele-therapy. “It was effective, and it hooked us,” Purdom told the Pressure Chamber audience.

They launched DotCom Therapy two years ago, with just the two of them. Today, they have 56 employees and clients in 18 U.S. states and in Mexico, China and Thailand.

A pilot program will start this fall in Tanzania.

The company plans to expand to other services, such as occupational therapy and audiology, and to more areas. Read more …