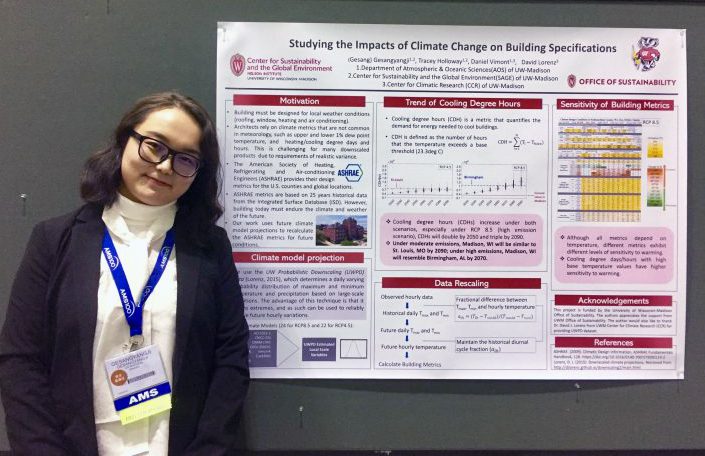 Gesang presented her research at the 100th American Meteorological Society annual meeting, in Boston, January 2020. Her poster was also named outstanding student poster at the conference.

When she was young, Gesangyangji would stare at the peaks on the mountains surrounding Lhasa, her birthplace in the Tibetan Plateau. They were covered in snow. But as she grew up she noticed the snow disappearing, the white lines chased up the mountain by gray and green rock.

“I was wondering,” she said, “Why is this happening? What can I do about this?”

Gesangyangji, who goes by Gesang, found an answer years later. In 2018 she moved to Madison to work on an M.S. in Atmospheric and Oceanic Sciences. In the program she studied air quality over the Tibetan Plateau—those skies that held the mountain peaks from her youth—and sought to discover whether an observer could see sources of energy, like from buildings or transportation, via satellite.

But the next year the plan changed. Missy Nergard, the Director of Sustainability at UW–Madison, approached Gesang’s advisors, Tracey Holloway and Dan Vimont, with the idea of researching how one could use climate data to inform building energy design. The idea interested Gesang, and she altered the course of her research.

“Buildings have been designed for the past climate because all those building design metrics we have are calculated from historical weather data,” she said. “So what we are thinking is, as the climate is changing, if we use projected climate data to calculate those building design metrics, how different would [the buildings] be? Would our current heating and cooling systems have any problems in the future climate?”