The math adds up here 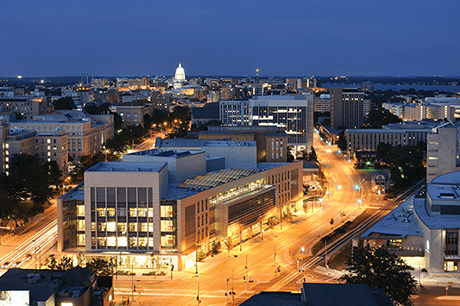 20 Mar The math adds up here

In the Madison Region, computer and life science skills form the foundation of a globally competitive cluster in biotech and healthcare IT.

From Epic Systems’ breakthrough software that revolutionized medical records, to Stratatech’s regenerative skin therapies, the capital region of Wisconsin has been churning out innovative firms whose primary purpose is the promotion of personal health and wellness.

Anchoring a metropolitan region of 866,475 people, Madison outperforms much larger MSAs in a variety of intellectual property pursuits:

The anchor of this sector is Epic Systems, the country’s leading developer of electronic medical records and the Madison Region’s largest private sector employer with 10,000 workers. Each year, more than 1,000 employees leave Epic, many to start spinoff companies that augment Madison’s leadership position in healthcare IT.

“Epic gets more than 100,000 applications every year from around the world,” says Zach Brandon, president of the Greater Madison Chamber of Commerce. “When people say you can’t compete in the Midwest for worldwide talent attraction, that is absolutely not true.”

Epic’s Madison campus, at 6.5 million sq. ft., rivals those of Apple, Google and Facebook in California. “In its design, look and feel for the employee, Epic’s corporate campus is second to none,” says Brandon. “When Forbes did an article on cities winning the battle for information jobs, they said you would expect to find a company like Epic in Silicon Valley, Austin or Seattle. You don’t expect to find Microsoft-like campuses in Madison.”

URP adds value in many ways

Illumina has grown its Madison workforce from 55 people in 2011 to more than 100 today. “We expect to add another 20 employees soon,” Caruccio adds. “We are a very technology-heavy company, so we look for people with scientific backgrounds who work in labs. We do high-tech production in bio-chemistry.”

Madison is the perfect fit for this work, he says. “The nucleus of protein expertise was here,” says Caruccio. “Combine that with a university with over 100 years of work in bio-chemistry, and you have a very strong pull. It is easier to attract people here.”

Aaron Oliver, managing director of University Research Park in Madison, says that URP has been a hub of success stories since 1984. “Stratatech is a prime example,” he notes. “A faculty member in one of our labs discovered a way to develop a skin line that lives on its own. The product has no direct competitor in the marketplace. We incubated them from birth to the day they had over 50 employees in Madison.”

Located just 5 miles west of the UWM campus, URP houses the largest concentration of employees in the area outside of state government.

“We serve the needs of the companies and the science coming out of UW. We are building the ecosystems around the strengths of the university,” says Oliver. “We are appealing to companies because we are a helpful partner in facilitating a relationship with UW; the university can provide benefits to companies located in URP; a lot of employers like the idea that their rent is going back into the system that is training their workforce; and we have a great concentration of similar companies.” Read more …