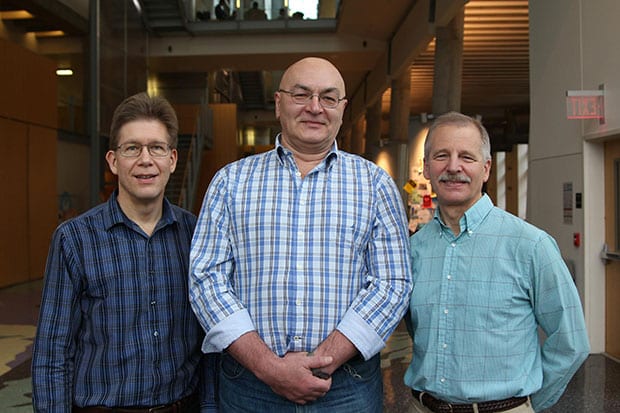 The Tactile Communication and Neurorehabilitation Laboratory (TCNL) recently received $4.5 million from the Department of Defense to conduct research on the efficacy of a traumatic brain injury therapy, developed in the UW-Madison lab, for use on military personnel.

According to the Defense and Veterans Brain Injury Center, there have been more than 320,000 military personnel diagnoses of traumatic brain injury since 2000. TCNL Clinical Director and Biomedical Engineering Senior Lecturer Mitchell Tyler (pictured far right with Kurt Kaczmarek (left) and Yuri Danilov (center)) says that in 70 to 80 percent of traumatic brain injury cases, the patient will recover. “But for those people who don’t recover, there’s nothing else out there. There simply is no other therapy to help them deal with those debilitating symptoms,” he says.

For those people suffering from a traumatic brain injury, the symptoms can be debilitating. “They have residual problems with balance, gait, eye-movement control, sleep disturbances, headaches, chronic pain, memory, attention, and executive function problems—a whole host of issues,” says Tyler. “They all have to live with one or more of these various symptoms.”

The five-year study will use the Portable Neuromodulation Stimulator (PoNS) device developed by the TCNL. The PoNS device passes electrical stimulation into the brain via the tongue, a method TCNL that researchers have shown can noticeably reduce symptoms related to traumatic brain injury. “We have demonstrated we can therapeutically address balance and gait issues,” he says. “It’s been our experience that we can treat a pretty broad spectrum of brain injury, up to and including severe injury.”

Tyler says that despite the promising progress of this research, it will still take patients months or years to recover from severe traumatic brain injuries. “It’s not a quick fix and it’s not a magic potion. It’s a lot of hard work for the individual,” he says. “But we have been able to demonstrate that we can produce meaningful results both clinically and also scientifically. Based on our imaging studies, the way that the brain functions apparently changes in response to this therapy.”

Before therapists can use it on military personnel, the PoNS device must obtain Federal Drug Administration approval. The FDA trials for this therapy will begin in May 2015 at the Orlando Regional Health Center, Oregon Health Sciences University/Portland Veterans Administration Hospital, and the Montreal Neurological Institute.

– Reposted from UW-Madison College of Engineering