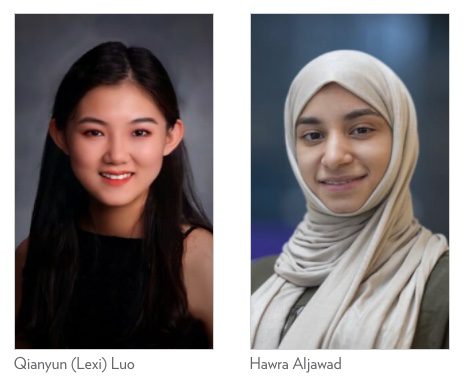 University of Wisconsin–Madison seniors Qianyun (Lexi) Luo and Hawra Aljawad reached the final stage of competition this year for the Rhodes Scholarship, one of the most prestigious and selective undergraduate academic honors in the world.

The 32 Americans chosen as Rhodes Scholars were announced Nov. 20. An additional 203 American students were finalists for the coveted awards, including Luo. Aljawad was a finalist in her native Saudi Arabia. (The scholarships are awarded by countries or groups of countries.)

Luo, of Bloomington, Illinois, is majoring in biochemistry and statistics. Aljawad is a chemical engineering and biochemistry major.

“To make it to the finalist stage is a tremendous honor — only the most elite students can claim this accomplishment,” says Provost Karl Scholz. “We are so proud of Hawra and Lexi and all they’ve achieved during their time with us. I know they will go on to do remarkable things in their careers.”

Both Luo and Aljawad have earned numerous prestigious awards. In 2021, Luo was named a national Goldwater Scholar and Astronaut Scholar. Both awards support U.S. students who show promise of becoming part of the next generation of STEM research leaders. Aljawad is a recipient of the KAUST Gifted Student Program Scholarship. It is awarded by King Abdullah University of Science and Technology in Saudi Arabia to 100 top-tier high school students pursuing their bachelor’s degrees in the U.S.