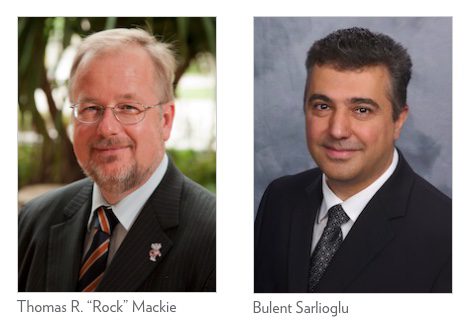 University of Wisconsin–Madison professors Thomas R. “Rock” Mackie and Bulent Sarlioglu have been named fellows of the National Academy of Inventors, the organization announced today.

The NAI program recognizes “academic inventors who have demonstrated a spirit of innovation in creating or facilitating outstanding inventions that have made a tangible impact on the quality of life, economic development, and the welfare of society.”

An NAI fellowship is considered the highest professional distinction given solely to academic inventors.

“These two researchers and their accomplishments are great examples of how UW research is translated into knowledge that spurs new companies, products and industry competitiveness,” says Steve Ackerman, UW–Madison vice chancellor for research and graduate education. “As innovators in the spirit of the Wisconsin Idea, they are deserving of this distinction.”

Mackie is an emeritus professor of medical physics and human oncology and an emeritus investigator at the Morgridge Institute for Research. He is also the former director of the Isthmus Project innovation hub and former chief innovation officer at UW Health.

Sarlioglu is a professor of electrical and computer engineering at UW–Madison. He has been awarded 20 U.S. patents and 12 international patents. Many of those patents were granted while he worked at Honeywell between 2000 and 2011, and his record of invention has continued during his time at the university. He has four additional patents currently in preparation.

Each of the university’s fellows has collaborated with the Wisconsin Alumni Research Foundation to patent, license and commercialize their research.