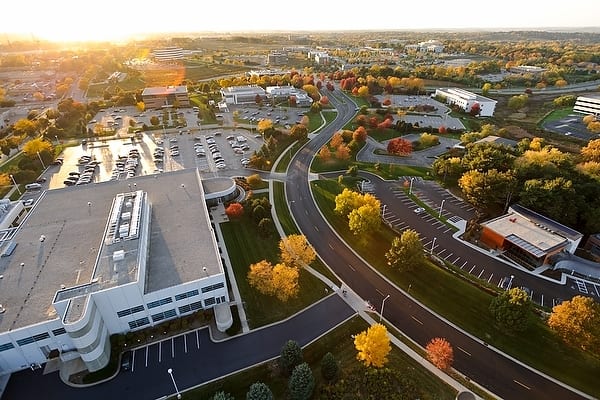 That, says URP’s managing director, includes bringing in restaurants, coffee shop and fitness centers, as well as adding more picnic tables and social events and expanding URP’s food carts program. It’s all part of an effort to attract more companies to URP and bring in talent that increasingly seeks urban spaces and collaboration.

“It’s a trend and a force that Research Park has to capture going into the future,” Olver said yesterday at a Rotary Club event.

That’s not to say that URP, located three miles west of UW-Madison, doesn’t already have a wealth of companies there. In fact, Olver said, the amount of tech companies at URP make it one of the densest tech spaces in the country.

But URP wants to add to that density, Olver said, bringing in smaller companies to its spaces but also larger tenants such as Exact Sciences, which recently announced an expansion at URP rather than downtown Madison.

And that’s not even counting URP’s second location on the far west side, which Olver said there’s little rush to start developing.

“It’s a big agenda, but it’s driven by this singular idea that if we compress people, smart people — and Madison has a lot of them — into tight spaces and help them foster interaction, we will unleash innovation at increasing returns to scale,” Olver said.

It’s a trend that has tremendous implications, said the state’s former commerce secretary, pointing to the oft-made comparison between Wisconsin and Minnesota.

The disparities in wage and GDP growth between the two has actually been happening since the mid-1970s, Olver said, and can partly be explained by Wisconsin’s geography, which became more suburban as manufacturing spread outside the cities.

Those numbers impact the amount of innovation that happens in an area, Olver said. While the amount of houses increases at the same rate that population grows, that’s not the case with innovation outputs, Olver said, noting that larger cities are twice as innovative per capita than smaller ones.

“It’s not just that software engineers go out to Silicon Valley because there’s jobs there and because they like it there,” Olver said. “There’s something about the environment that actually makes them more productive.”