Posted at 15:41h in Directors Cut, URP News by aveak 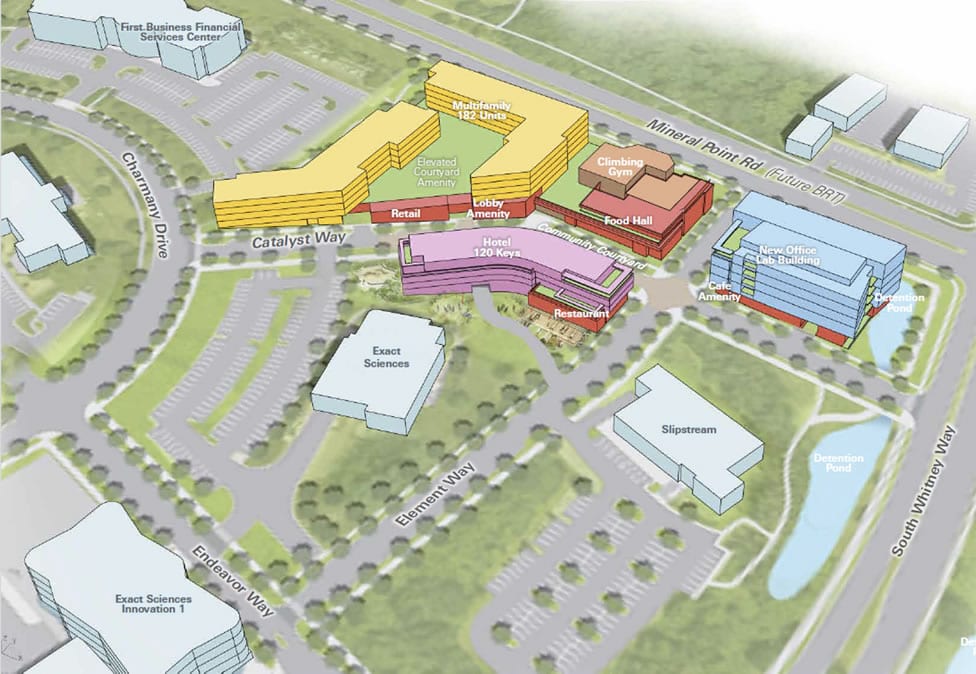 In November of 2020, the University Research Park and Mandel Group held a neighborhood meeting to introduce the community to the upcoming Element District, which will be comprised of a new laboratory building, housing, a food hall, and a climbing gym located on the corner of Mineral Point Road and Whitney Way. Read more about the Element Collective.

The Element District development will be divided into roughly three phases:

Phase I, the infrastructure including a new street grid, will commence after June 21.

A significant early step includes a restoration project that will remove undesirable and invasive plant and tree species. URP hired an arborist to catalog tree species in the area, assess tree health/safety, and make recommendations on preservation, protection and removal. URP and the Mandel team have identified numerous heritage trees such as oak and hickory that will be preserved. For example, the Mineral Point façade of the apartment building has a carveout to preserve a centennial oak. However, we also identified numerous undesirable species such as buckthorn, honeysuckle, sumac, prairie dogwood, and boxelder that would not have been present in the past and are detrimental to native prairies and oak savannahs. (See more at: https://oaksavannas.org/index.html). Following consultation with our arborist, affected ground tenants, and experts at the University of Wisconsin Arboretum, URP will remove these species. In addition, we propose to remove some heritage trees that are located in future public right-of-ways or on future building sites and dead or diseased trees. URP will plant new trees to replace the removed heritage trees in various locations (and welcomes requests).

While this will change the look of a portion of the park, it will improve the habitat for many native species and augment the bird and pollinator habitat. You can read more about expert guidance from the DNR, which has issued guidance to urban foresters and arborists encouraging them to identify, remove, and refuse to plant invasive species to keep our urban forests healthy. Other experts sources include the U.S. Forest Service and multiple UW-Madison sources, including the Arboretum.

In fact, UW-Madison’s Arboretum is a great example of the type of urban ecosystem we seek to create in the park, albeit with more buildings. Prior to the arrival of western settlers, southwestern Wisconsin was primarily prairie and prairie oak savannah. First peoples managed these lands using prescribed burns to help prevent undesired flora from overtaking native plants and to help them germinate and grow. Post European colonization, much of these lands were intensively farmed and grazed or grew into thick forests when historical land management practices were ceased. The site in question was still farmed as recently as the late 1990’s. Many throughout the Midwest are working to restore remnant oak savannah clusters and to reclaim the oak savannah ecosystem from over a century of neglect and mismanagement.

Throughout the park there is an existing network of native tall grass prairies, predominantly located in our extensive bioswale network. As you may know, the Research Park performs prescribed prairie burns on a three-year cycle. Because of this intentional management, these prairies are home to native birds such as blue birds and wild turkeys, and host many pollinators as well, including honey producing beehives near the MGE Innovation Center. We have also confirmed with the UW-Madison Urban Canid Project that this development will not alter habitat for our resident coyotes. Pedestrian paths wind through most of our restored prairies, and we are working to expand that network further.

The University Research Park has been pursuing the goal of a native landscape since the park was founded on a former experimental farm, and we intend to carry on that tradition at the Element District. The Element District development team has hired landscape architects with Smithgroup and Perkins + Will to redesign the site to accommodate stormwater and knit this essential infrastructure in with the surrounding natural environment. The stormwater ponds will be surrounded by native plantings and new and preserved heritage trees, all linked together by an upgraded pedestrian path which will connect to the existing network in the park. These native plantings will help form a more natural landscape and be an attractive destination for the neighborhood. Additionally, we are designing the building to be safe for our feathered friends. With the extent of landscaping and bird habitat surrounding the new buildings, our architects are incorporating bird-safe glass and other architectural designs so the building is visible to birds and strikes are avoided.

Following this initial site work, URP will also begin the construction of permanent and temporary stormwater management facilities. The plan, approved by City of Madison staff, is to construct temporary stormwater ponds to hold excess rainwater during construction. Eventually, as construction progresses, these ponds will either be moved to their permanent location or finished with landscaping. Following full implementation, this project will upgrade the infrastructure from its current design aimed at detaining 10-year storms to the modern Madison 200-year standard to vastly improve storm water management and help protect our lakes.

Construction on the buildings will hopefully commence later in 2021. Later, we will provide an additional progress update on the construction schedule. In the meantime, please do not hesitate to reach out with any questions.