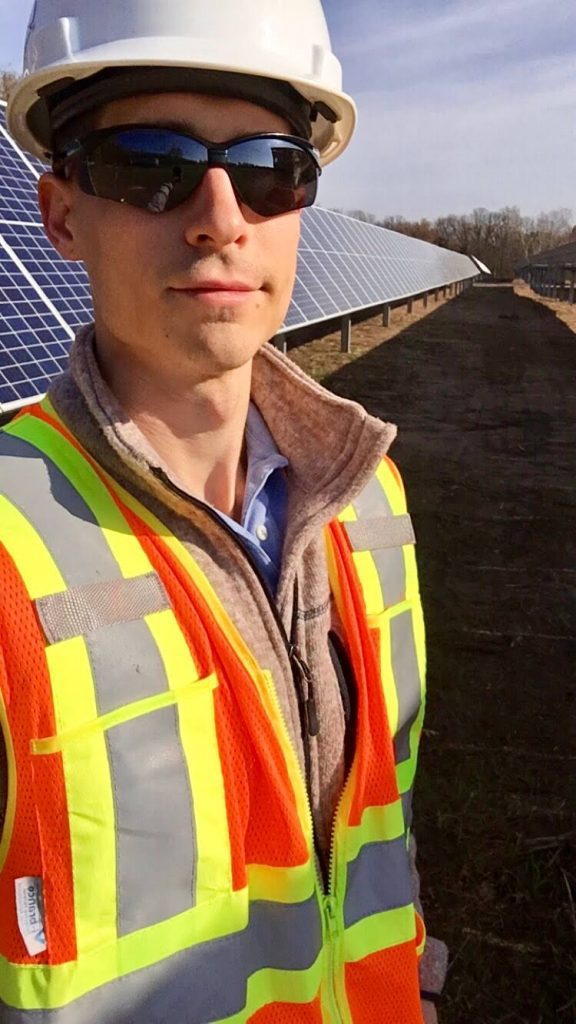 Josh Cook, UW–Madison Geological Engineering class of 2015, became interested in renewable energy while participating in a summer intensive Mandarin language program in China. He lived in Tianjin, a city of over 15 million people, and also had the chance to visit Beijing and Shanghai, each of which has over 20 million residents. “These cities were much larger than any I’d been to in the United States,” said Cook. “It was a really cool experience.” Cook also witnessed the smog problem of large cities first-hand, “and that kind of set me on my way. I realized that this was something I could help out with and make a difference.”

Cook grew up in Minnesota and became interested in engineering in high school. When it was time to apply for college, he toured UW–Madison and immediately fell in love. Though he initially pursued coursework in both international studies and engineering, Cook’s trip to China solidified his desire to pursue engineering as a career.

After graduation, Cook worked as a consultant, doing foundation design and other similar projects. But when an opportunity arose to join EDF Renewables, he jumped. EDF Renewables is a subsidiary of Électricité de France (EDF), which is headquartered in Paris and operates in 37 countries. Much of EDF’s purview is nuclear energy, because 80% of the energy in France comes from nuclear power plants, but in recent years the industry has seen a major shift toward more sustainable energy sources. Today, EDF Renewables is a robust and growing operation that operates in 22 countries.

Cook is a project engineer, which involves engineering procurement and design. “We take a project after it’s been developed—which includes the site permitting, land use, real estate—and then we design it all the way up through to the construction stage. We’re working with survey crews, civil earthwork contractors, electricians, mechanical contractors, foundation crews, pile drivers, concrete guys, utilities, landowners—you get to meet the local community. It’s a very satisfying career.”

A Badger comes back
One of Cook’s most exciting projects was the design for the O’Brien Solar Fields, which is currently the largest solar array in Dane County at 160 acres and over 60,000 panels. Located on the O’Brien family farm at the corner of Lacy Road and South Seminole Highway, the O’Brien Solar Fields will provide 20MW of locally generated solar energy to businesses, municipalities, and public institutions under Madison Gas and Electric’s Renewable Energy Rider. UW–Madison has agreed to purchase half of this output, which will account for approximately 5% of campus electricity use. As of early June 2021, the O’Brien Solar Fields were energized and operational.